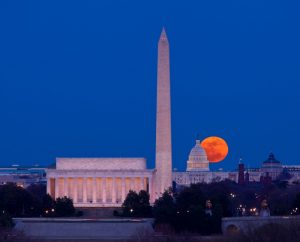 The National Mall in Washington, DC is filled to the brim with monuments, statues, and memorials of all types. Pershing Park has officially been a part of these monuments since 1957, when it was named after John J. Pershing, General of the Armies in World War I. As different groups proposed competing memorial ideas for the space, it actually sat untouched and gathering garbage. The indecision continued until 1963, when officials planted grass and flowers to add new life to the square.

In that same year, a plan was proposed to redevelop the area between the White House and the United States Capitol. Although the original plan was altered, it did lead to the construction of Freedom Plaza, adjacent to Pershing Park. Both were constructed simultaneously from 1979 to 1981. The landscape at Pershing Park was designed by M. Paul Friedberg, recent recipient of the American Society of Landscape Architect’s highest honor, the ASLA Medal. The park contains a memorial to John J. Pershing, as well as several memorial benches and walls that describe his many accomplishments. In addition, Pershing Park contains many of Friedberg’s now signature design elements, such as a sunken plaza filled with water (frozen for ice skating in the winter) surrounded by amphitheater style seating, a waterfall made out of rock-cut granite, as well as plenty of greenery. Today, Pershing Park is eligible for listing in the National Register of Historic Places. However, recent plans may diminish its chances.

The Future of Pershing Park

In recent years, Pershing Park has been declining, with mechanical issues in the skating rink and adverse vegetation growth. In response to these maintenance issues, a competition has been announced for a World War I Memorial in the spot currently occupied by Pershing Park. What this means for Pershing Park is currently unclear — though many landscape architects are convinced the language of the competition leans toward demolition of the existing park rather than renovation. You can read more on this story from the Huffington Post.

The five finalists in the design competition were recently announced, you can find them here. We were impressed by the visions of these architects, even though it could potentially mean changing a piece of our history. What are your thoughts on the great Pershing Park/National World War 1 Memorial debate? We want to know!