Our team at Petrillo Stone Corporation was excited to take on another fantastic custom carving for the Palace Hotel in New York City! As history buffs, being asked to contribute to a hotel with such a rich history was an honor. Here is some background on the job!

The Use of Brownstone

A historical element in its own right, Brownstone (sometimes called ‘freestone’) was often used in early American construction by Quakers. Much of the old mill houses and mills around Pennsylvania were in fact built using Brownstone. In the 1700s, headstones were crafted out of Brownstone because of how easy it was to carve dates and names into the stone. It was found, however, that Brownstone did not withstand the elements and was highly susceptible to erosion – so its use in building was phased out.

As new methods and materials were discovered and used for construction, Brownstone became a prized stone used in historical buildings as accents or elegant features – rather than in the construction of the building itself.

Carving Brownstone thrusts us back into the 1700s. Not only is this a beautiful stone, but using it in historical buildings only adds to the aesthetic. We felt like time travelers as we carved these beautiful Brownstone features that will soon be added to the Palace Hotel in New York City – a hotel that offers stories more than 100 years in the making. 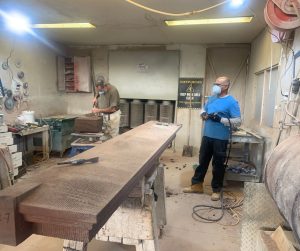 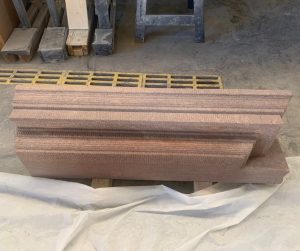 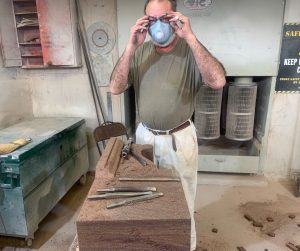 We can’t wait to update our blog and social media with pictures of this project after it is installed at the Palace Hotel in NYC. Make sure you follow us and stay in the know so you don’t miss out on other beautiful hand carvings in and around New York.