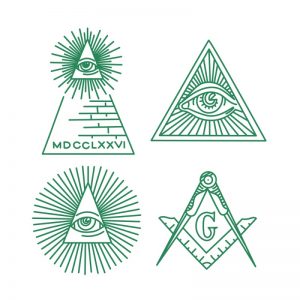 We’ve all heard of the freemasons, a society dating back to the 1700’s known for its secret ways and famous members. Henry Ford has actually been confirmed as a member of this fraternity.

Freemasonry is traced back to Scotland, England and France in the middle ages. Men would form stone mason guilds to train others on how to properly construct buildings. Through the guilds, they would encourage a high quality of workmanship from members. The men would share insider tips, which eventually became protected by memberships and passwords. Perhaps the most intriguing part of freemasonry is the fact that freemasons often frown upon taking credit or bragging.

Because freemasons remain so tight-lipped about member rituals, many have mustered a suspicion toward the group. However, a travelling exhibit created by the Bruce County Museum & Cultural Center in Southampton, Ontario is promoting understanding and appreciation for Masonic history and its influence on society. This exhibit is titled “Freemasonry: A History Hidden in Plain Sight,”and is described as follows:

This exhibit informs the public, arouses curiosity and promotes learning about Freemasonry’s heritage and cultural identities.  Freemasonry contributes to communities in a number of ways through the unspoken and invisible act of helping those in need.  Inspired by, and with enormous assistance from, our local Masonic Lodges, this exhibit attracted a very high shoulder-season audience to our facility in the spring of 2011.  Local Masonic Lodges in the area of your museum may wish to take advantage of the increased profile brought to Freemasonry through recent books and movies to assist you to ensure that your community has access to the Freemasons’ story that’s “hidden in plain sight.”  Inclusion of artifacts from your partner Lodge makes this exhibit appealing to locavores.

Although Ontario may be a long trip for most of us, consider contacting the museum to see if the exhibit will be travelling near you. This is an interesting part of history that we don’t often have the opportunity to explore.