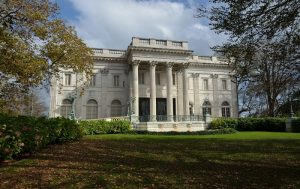 Have you visited the museum at Marble House in Newport, Rhode Island? Now open to the public, the building is a landmark in American architecture and still strikingly beautiful.

Marble House was built as a summer home between 1888 and 1892 for Alva and William Kissam Vanderbilt. While summer homes in the area were traditionally wooden, Marble House marked the transition to the now well-known stone palace. Alva Vanderbilt was known in society for her flare as a hostess, and it’s said that she saw Marble House as a “temple to the arts”.

According to the website, “The house was designed by the architect Richard Morris Hunt, inspired by the Petit Trianon at Versailles. The cost of the house was reported in contemporary press accounts to be $11 million, of which $7 million was spent on 500,000 cubic feet of marble. Upon its completion, Mr. Vanderbilt gave the house to his wife as a 39th birthday present.”

Marble House is one of the earliest examples of Beaux-Arts architecture in the U.S. The building is U-shaped, and consists of four stories although it only appears to be two from the outside. The load-bearing section of the walls are made of brick, and the entire exterior of the building is Westchester marble. Not surprisingly, this gorgeous property as also appeared in several films and television series.

For more about Marble House and the lifestyles of the rich at the turn of the century, visit the Preservation Society of Newport County’s website.