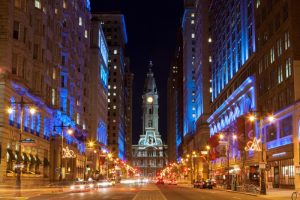 If you’ve ever been downtown in Philadelphia, there’s no question that you’ve noticed City Hall. The remarkable, French Renaissance-style building is breathtaking and easily identifiable, thanks to William Penn gracing the structure’s top.

You may also know that when plans for construction began in 1871, City Hall was intended to be the tallest structure in the world at 548 feet tall. Unfortunately, construction of the Eiffel Tower  and Washington Monument ruined that dream before City Hall’s construction ended. However, neither of those structures were used as buildings so Philadelphia’s City Hall remained the world’s tallest occupied building until 1909, when the Metropolitan Life Building was built in New York.

The reason that City Hall still strikes us at Petrillo Stone Corporation as legendary is the fact that is an all-masonry, load bearing building — and still one of the largest in the world. Most of the seemingly stone buildings we see today actually have a support frame built of steel and iron. This building, however, is made of brick and covered in white marble and granite. It has walls up to 22 feet thick at the base to support its immense weight.

Because this type of construction is so time-consuming and expensive, most designers have virtually abandoned load-bearing structures over the last century. City Hall took 30 years and over 24 million dollars to complete. This is a beautiful example of pure stone masonry that has rightfully earned its spot as the center of a historic city.