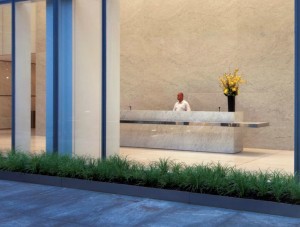 At the corner of 42nd Street and 6th Avenue in Midtown Manhattan is the 1095 Avenue of Americas Plaza, a site that has quickly become a high traffic site in NYC. The plaza is essentially the front door for a commercial office building that serves as MetLife’s corporate headquarters. Because of the threat of wear caused by tons of foot traffic as well as some harsh weather, the design for this site had to be both durable and beautiful.

Building Stone Magazine recently documented this process in its Spring 2015 issue. In this project, Petrillo Stone Corporation was responsible for furnishing and installing the stone used for the building lobby, elevator lobbies, and concourse — a total of 7,400 square feet of material. The Santucci group supplied and fabricated the Joya White Carrara marble used for the walls and countertops, as well as the white terrazzo flooring. The stone is unique due to its white background with very thin gray veining. These light colors were used because the original entrance to the lobby was described as “tunnel-like,” and a white background gave it a more open feel.

The following is an excerpt from the article, “Meeting The Demands Of A Busy Northeastern Environment,” in which our very own Frank Petrillo describes the job.

As a whole, the installation process went smoothly, but Petrillo found difficulties with the lobby because the building remained in use. “The installation took place in an occupied building so we basically installed sections at a time so we didn’t disturb the tenants,” said Frank Petrillo of Petrillo Stone Corporation. “It’s a very busy building. There were certain areas, such as the elevators, that were done at night. This prevented us from interrupting the flow of traffic. We did the other areas during the day. We had to fence it off so that people could get by while we were working.”

You can see the whole article in Building Stone Magazine’s online publication on page 70. Below are some screen shots of the article which display the lobby. 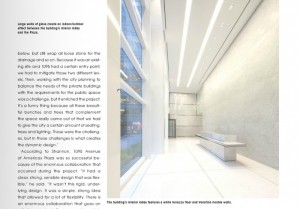 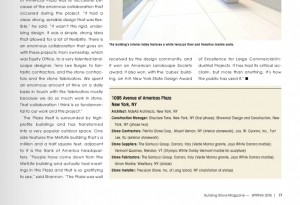